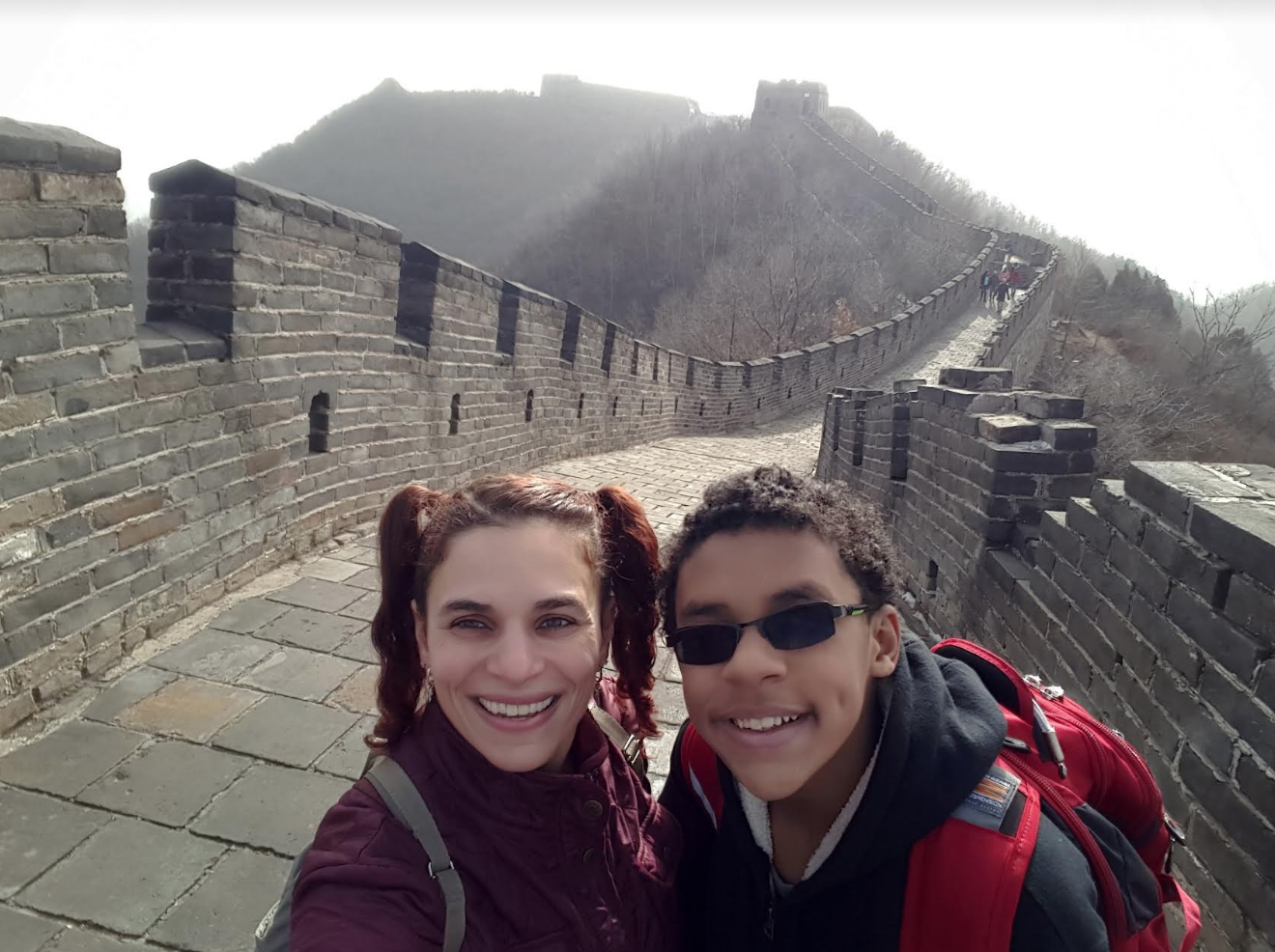 Kaliq and Alia Naffouj enjoy the Mutianyu section of the Great Wall in Beijing's Huairou District during one of its quieter seasons on their trip to China November 2016.

Being diagnosed with a primary immunodeficiency may be initially alarming but many people return to good functioning capacity with the proper treatment. Fifteen-year old Kaliq of Augusta, Georgia has Chronic Granulomatous Disease (CGD), and like many people with CGD, you would never know it.

As an active teenager, he has many interests and activities, from playing the French horn and mellophone in his high school’s marching band, to going on camping trips with his Boy Scouts’ troop. When he’s not busy at home, Kaliq and his Mom, Alia Naffouj, love to travel. Their adventures have taken them to Medieval castles in Germany, Mt. Fuji in Japan, and the Great Wall of China.

In fact, during his Make-A-Wish Trip, he ziplined in Fiji. He also enjoys just being a teenager, hanging out at home and playing video games with friends.

In others words, Kaliq does not let CGD define him. While he takes precautions, he lives each day as best he can and works hard to achieve his goals. Indeed, he’s currently a Life Scout and aiming to become an Eagle Scout, which involves earning all the merit badges that come with it, from “First Aid” and “Life-saving” to adventurous hiking missions. Does his mother worry when Kaliq is on hiking trips, many miles from home? Yes. Does she let her worries about CGD define her? No.

“When he’s camping, he does everything the other Scouts in his troop do, except when it comes to swimming in lakes,” said Alia. Many physicians suggest that swimming should be confined to well-chlorinated pools. Brackish water in particular may expose people to organisms that are specifically dangerous in CGD. “He’s old enough now to know his limitations on that,” she adds, “and thankfully, he prefers pools!”

It’s evident that Alia has learned to walk the fine line between taking her son’s CGD in stride while never dropping her guard. The road to diagnosis, however, was a harrowing one. At seven years old, Kaliq had strange fevers that did not resolve. Although she took him to his pediatrician, like many people with CGD, Kaliq did not present as someone who had a serious infection and was repeatedly sent home. After two trips to the emergency room, doctors eventually gave him a CT scan and were shocked to see that both of his lungs were seriously infected with pneumonia. Pneumonia is a common problem in CGD. He was immediately admitted to the hospital, and thankfully, once doctors determined the correct course and administration of antibiotic treatment, he got better quickly. Also, a perceptive infectious disease specialist at the hospital picked up on his atypical response to a life-threatening infection, which is telltale sign of CGD.

Alia, like most moms of a child with CGD, is dedicated to ensuring Kaliq, her only child, is healthy. She takes him to his annual appointments at The National Institutes of Health, reads up on the latest research on disease management as well as curative treatments, and has encouraged him to be disciplined about standard prophylaxis. The effect of prophylaxis is to build a wall around the person. It can still be jumped over, but prophylaxis makes it harder for infections to get in. She and Kaliq also enjoy attending events and conferences held by the Immune Deficiency Foundation. Her efforts are apparent. Aside from a prolonged fever last year, for which she had his blood checked and lungs x-rayed, Kaliq has not had a serious infection since his diagnosis in 2010.

Because he has been doing so well and has some neutrophil oxidative burst, which means that his immune system has a limited ability to fight infection, Alia said they are opting against a stem cell transplant at this time as it is challenging to find a fully matched donor. “I’m of Middle Eastern descent and Kaliq’s father is African-American, which makes our chances of finding a bone marrow match almost nil,” she said. “We’re watching the progress of gene therapy instead, and with the way things are going, I think that will be an option for us in the future.”

Meanwhile, Kaliq has other things on his mind. He’s already thinking about college, and of course, he’s setting his sights high on that too, with hopes of attending Massachusetts Institute of Technology to pursue his interest in aerospace engineering.

Where does Kaliq get his inspiring sense of motivation? In addition to clearly having a great and caring Mom, he meditates on the following quote by Roy Mustang, one of his favorite video game characters:

"Nothing's perfect, the world's not perfect, but it's there for us, trying the best it can. That's what makes it so beautiful.”

This content should not be used as a substitute for professional medical advice. In all cases, patients and caregivers should consult their healthcare providers. Each patient’s condition and treatment is unique. The benefits and risks of any treatment should be discussed with the patient’s provider.