It’s Still a Beautiful Day in the Neighborhood

A Member of the PI Community Remembering Her Friend, Mr. Rogers
Home / News / It’s Still a Beautiful Day in the Neighborhood

It’s Still a Beautiful Day in the Neighborhood

Dr. Mary Manz Simon, 71, was a friend of the beloved late Fred Rogers. First getting to know him from her time as a columnist for Christian Parenting Today magazine, she first interviewed him in 1994 and their friendship continued throughout the years with many letters back and forth. Dr. Mary cherishes her friendship with Mr. Rogers, and was even a consultant for the 2019 movie It’s a Beautiful Day In the Neighborhood starring Tom Hanks (who has recently tested positive for COVID-19).

“In a recent interview about the movie, actor Tom Hanks repeated one of Fred’s best-known quotes,” says Dr. Mary. “’Be kind. Be kind. Be kind.’ That was Fred Rogers. I know that’s true. My red wooden trolley is signed ‘with gratitude and affection’ in addition to a personal message.” 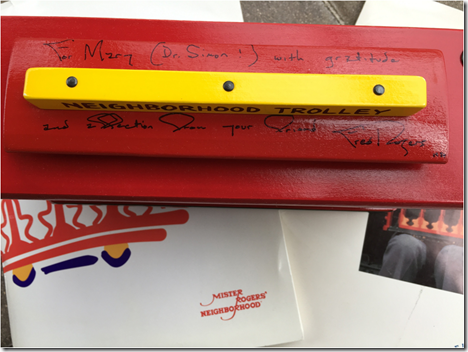 Their letters to each other marked the years of their friendship, along with the many trips that Dr. Mary made to Pittsburgh where Mr. Roger’s Neighborhood was filmed. “During the years I traveled to Pittsburgh, our son, Matt, who was a teenager at the time, would teasingly announce the arrival of mail from Fred,” she says. “Letters were easy to spot as envelopes were postmarked with a red trolley and the ever-present theme of ‘won’t you be my neighbor?’” According to her, the letters, notes, and even the afterthoughts on the backs of envelopes were written in his distinctive calligraphy. 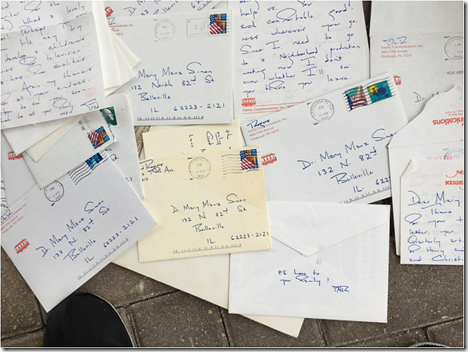 Today, it’s good to think of what words of advice we would hear from the late Fred Rogers. With the global pandemic that’s happening, it’s scary for all, but especially for those of us who are living with a primary immunodeficiency, like Dr. Mary, who has Common Variable Immune Deficiency (CVID). We have to believe that Rogers would do everything he could to remind us to be neighborly at this time and respect one another from a distance. He would remind us to wash our hands with soap and water, remain six feet away from one another, and to remain in our homes to protect others. He would remind us to be kind.

“And for me he was a friend whose spirit still lives, because the core virtues for which he stood have no expiration date,” says Dr. Mary. “Fred believed each person, from the ‘mighty to the very small,’ as he wrote in his Creation Duet, could have a positive impact. In a note dated Feb. 22, 1995, Fred wrote, ‘Isn’t it wonderful how we can all be used in different ways?’”