Patients with Hyper-IgM (HIGM) syndrome are susceptible to recurrent and severe infections and in some types of HIGM syndrome opportunistic infections and an increased risk of cancer as well. The disease is characterized by decreased levels of immunoglobulin G (IgG) in the blood and normal or elevated levels of IgM. A number of different genetic defects can cause HIGM syndrome. The most common form is inherited as an X-chromosome linked. Most of the other forms are inherited as autosomal recessive traits and therefore can affect both boys and girls.

Patients with HIGM syndrome have an inability to switch from the production of antibodies of the IgM type to antibodies of the IgG, IgA or IgE types. As a result, patients with this disease have decreased levels of IgG and IgA but normal or elevated levels of IgM in their blood. These different types of antibodies perform different functions and are all important in fighting infections. Normally, B-lymphocytes can produce IgM antibodies on their own, but they require interactive help from T-lymphocytes in order to switch from IgM to IgG, IgA or IgE. HIGM results from a variety of genetic defects that affect this interaction between T-lymphocytes and B-lymphocytes.

The most common form of HIGM syndrome results from a defect or deficiency of a protein that is found on the surface of activated T-lymphocytes. The affected protein is called CD40 ligand because it binds, or ligates, to a protein on B-lymphocytes called CD40. CD40 ligand is made by a gene on the X-chromosome. Therefore, this primary immunodeficiency disease is inherited as an X-linked recessive trait.

As a consequence of the deficiency in CD40 ligand, the T-lymphocytes in patients with X-linked Hyper IgM (XHIGM) are unable to instruct B-lymphocytes to switch their production of immunoglobulins from IgM to IgG, IgA and IgE. CD40 ligand is also important for other functions carried out by T-lymphocytes, so patients with X-linked hyper IgM syndrome (XHIM) have defective cellular immunity and are also susceptible to all kinds of infections, particularly opportunistic infections and to some types of cancer.

Other forms of HIGM syndrome are inherited as autosomal recessive traits and have been observed in both girls and boys. (See chapter titled “Inheritance.”) One of these forms results from a defect in CD40 and is clinically identical to XHIGM (the disease with the defect in CD40 ligand). Other autosomal recessive forms of HIGM syndrome result from defects in genes that are involved in the CD40 signaling pathway (they are abbreviated AID and UNG). The function of these genes is limited to antibody switching, so the other T-lymphocyte functions of CD40 ligand are not affected, and these patients are less likely to have opportunistic infections or cancer.

Finally, a defect in another X-linked gene (NEMO) that is necessary for the activation of the signaling molecule NF-κB has been identified in a form of HIGM syndrome that is associated with a skin condition called ectodermal dysplasia. (See chapter titled “NEMO Deficiency Syndrome.”) These patients have immunodeficiency with sparse hair and conical teeth among other abnormalities. NF-κB is activated by CD40 and is necessary for the signaling pathway that results in antibody switching. NF-κB is also activated by other signaling pathways that are important in fighting infections. Therefore, these affected boys are susceptible to a variety of serious infections.

Most patients with HIGM syndrome develop clinical symptoms during their first or second year of life. The most common problem in all forms of HIGM syndrome is an increased susceptibility to infection including recurrent upper and lower respiratory tract infections. The most frequent serious infective agents are bacteria, but viral illnesses are also more frequent and severe.

In patients with XHIGM and autosomal recessive HIGM due to a CD40 defect a variety of other microorganisms can also cause serious infections. For example, Pneumocystis jiroveci (carinii) pneumonia, an opportunistic infection, is relatively common during the first year of life, and its presence may be the first clue that the child has HIGM syndrome. Viruses such as Cytomegalovirus and fungi such as Cryptococcus may also cause lung infections.

Approximately half of the patients with XHIGM or CD40 deficiency develop neutropenia (low count of granulocyte white blood cells), either transiently or persistently. The cause of the neutropenia is unknown, although most patients respond to treatment with colony stimulating factor, G-CSF. Severe neutropenia is often associated with oral ulcers, proctitis (inflammation and ulceration of the rectum) and skin infections.

Finally, the risk for cancer, particularly liver cancer, is increased in patients with XHIGM or CD40 deficiency. A few patients with HIGM syndrome have developed a rapidly progressive neuroendocrine carcinoma.

Enlargement of the lymph nodes and the spleen is seen frequently in patients with autosomal recessive HIGM syndrome due to defects of AID or UNG. As a result, patients often have enlarged tonsils and adenoids that may cause snoring and obstructive sleep apnea.

XHIGM should be considered in any boy presenting with severe recurrent respiratory infections or an opportunistic infection who has low or absent IgG and normal or elevated IgM levels.

Failure to express CD40 ligand on activated T-cells is a characteristic finding. However, there are some patients with other forms of immunodeficiency who may have a markedly depressed expression of CD40 ligand while their CD40 ligand gene is perfectly normal; these patients do not have HIGM. The exact diagnosis of XHIM syndrome depends on the identification of a mutation affecting the CD40 ligand gene. This DNA analysis can be done in specialized laboratories.

The autosomal recessive forms of HIGM can be suspected if a patient has the characteristics of XHIGM but is either a female and/or has a normal CD40 ligand gene with normal expression on activated T-lymphocytes. NEMO can be suspected in a patient who has features of ectodermal dysplasia (such as sparse hair and conical teeth) and recurrent infections, normal or elevated IgM and low IgG, IgA and IgE as well as normal CD40 ligand expression on activated T-lymphocytes.

The diagnosis of the different forms of autosomal recessive HIGM can also be confirmed by mutation analysis of the genes known to cause these disorders.

X-linked Hyper IgM (XHIGM) and NEMO with immunodeficiency are inherited as X-linked recessive disorders, and only boys are affected.

If the precise mutation in the affected gene is known in a given family, it is possible to make a prenatal diagnosis or test family members to see if they are carriers of the mutation. Early diagnosis of any of the HIGM syndromes will allow initiation of treatment prior to the development of long-term consequences of serious infections.

Since patients with XHIGM or CD40 deficiency also have a marked susceptibility to Pneumocystis jiroveci (carinii) pneumonia (PCP), they should be started on prophylactic treatment with trimethoprim-sulfamethoxazole (Bactrim, Septra) as soon as the diagnosis of XHIGM is made. Other drugs for PCP prophylaxis are available if the patient is allergic to sulfa drugs.

When present, neutropenia may also improve during IgG replacement. Patients with persistent neutropenia may also require granulocyte colony stimulating factor (G-CSF) therapy, especially if they have infections, mouth sores or other complications associated with the neutropenia. However, G-CSF treatment is only necessary in selected patients and long-term treatment with G-CSF is usually not recommended.

Patients with XHIGM or CD40 defects should not receive live virus vaccines since there is a remote possibility that the vaccine strain of the virus may cause disease. Bottled water should be used to avoid exposure to Cryptosporidium.

Patients with XHIGM or CD40 deficiency have defects in T-lymphocyte function in addition to their antibody deficiency, and treatment with immunoglobulin replacement may not fully protect these patients against all infections. Hematopoietic stem cell transplantation (bone marrow or cord blood stem cell) has been performed successfully in many patients with XHIM. (See chapter titled ”Stem Cell Therapy and Gene Therapy.”) While a permanent cure is anticipated after successful stem cell transplantation, the long-term prognosis for these patients is not yet known.

Since patients with autosomal recessive HIGM caused by mutations in AID or UNG only have defects of antibody production with no defect in T-cell function, stem cell transplantation is not recommended.

There is a broad range of severity seen amongst patients with different genetic forms of HIGM. Those with defects primarily involving antibody class switching can be effectively treated by immunoglobulin replacement and can live long and productive lives. Those HIGM patients with associated defects in T-cell activation characteristically have more significant immune deficits and may encounter additional problems including susceptibility to more dangerous types of infections as well as the development of autoimmune disorders and cancer as further challenges. The experience with hematopoietic stem cell transplantation is encouraging for those with more severe disease, and further studies to evaluate long-term outcomes are underway. 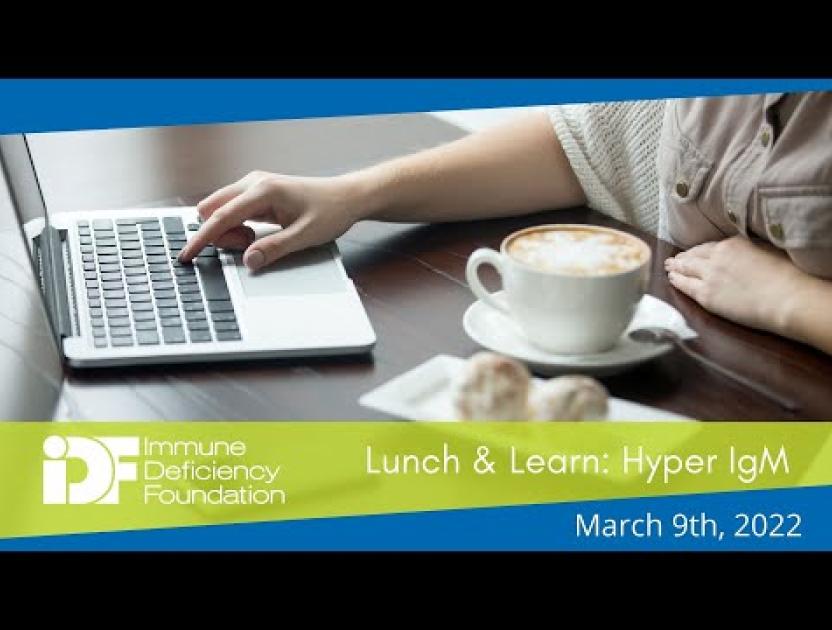 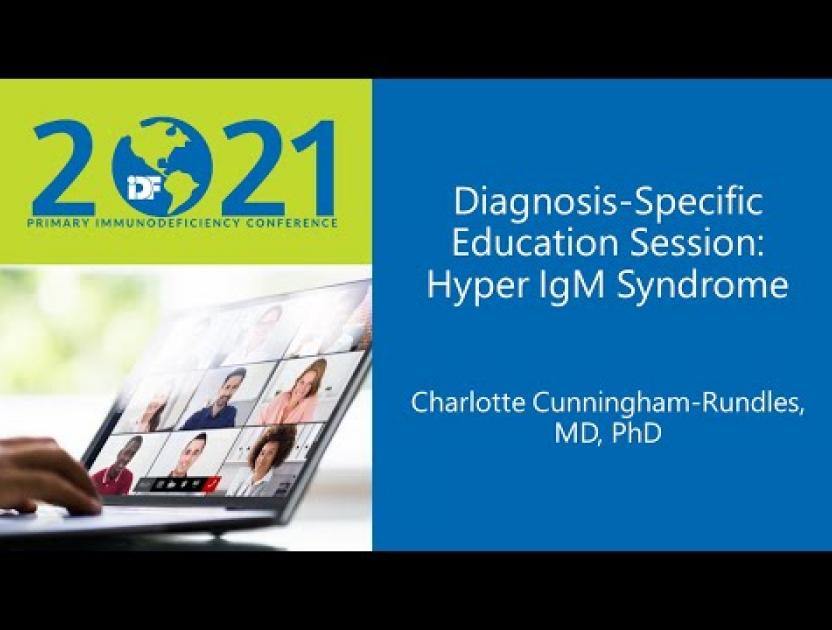 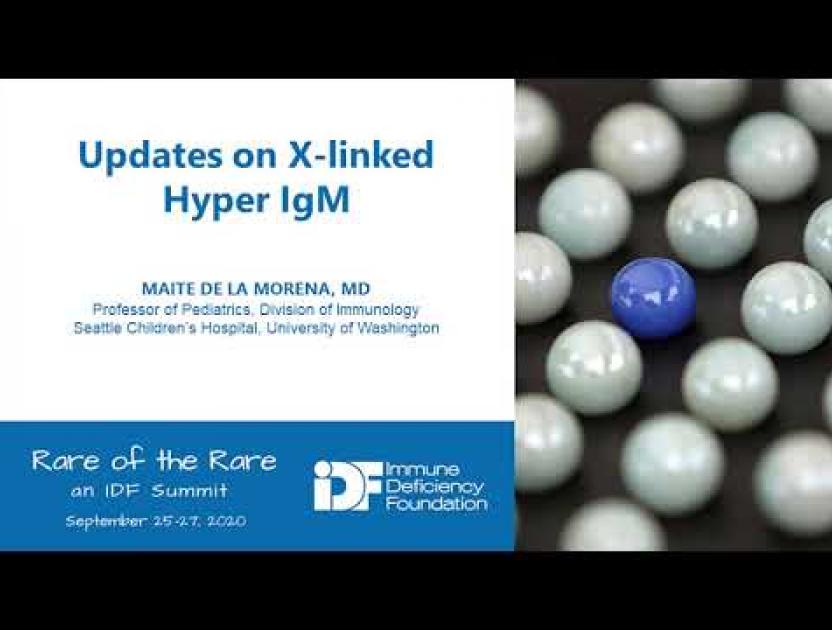 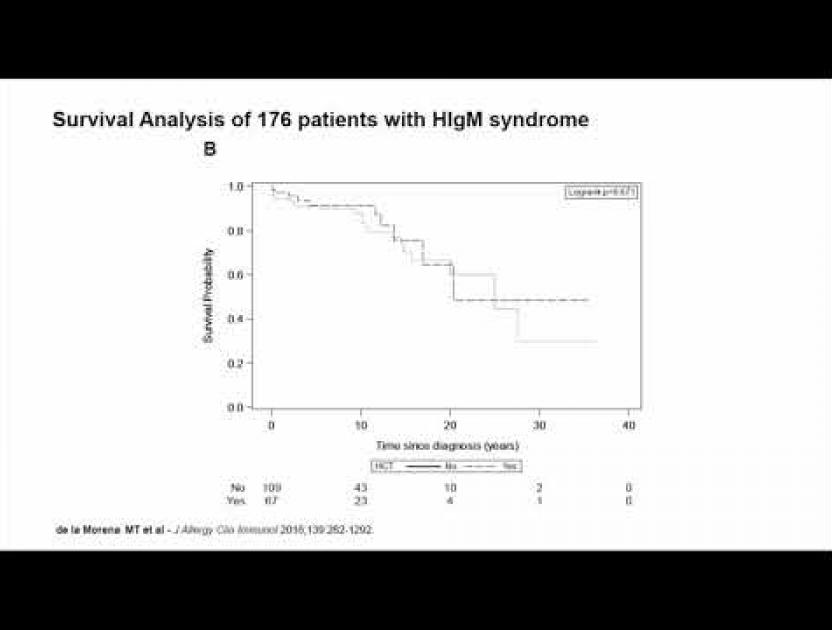 What About Carriers of XHIGM?
IDF Channel
View All Videos