The NEMO deficiency syndrome is a complex disease caused by genetic mutations in the X-linked NEMO gene (also known as IKK gamma or IKKG). It can involve many different parts of the body and often manifests in different ways in different individuals. The most common symptoms are skin disease and susceptibility to certain bacterial infections that can be severe and affect virtually any part of the body.

The NEMO syndrome was originally described as an association between ectodermal dysplasia (ED) and susceptibility to infections. Patients with ED have thickened skin, conical teeth, absence of sweat glands, and thin, sparse hair. In addition to the dry, flaky skin of ectodermal dysplasia, patients with NEMO deficiency have a range of infections with pus-inducing (pyogenic) organisms (Pneumococcus and Staph) being the most common. Infections may be found virtually anywhere in the body, including the lungs, skin, central nervous system, liver, abdomen, urinary tract, bones and gastrointestinal tract. Almost all cases of NEMO occur in boys.

The early description of these patients indicated a wide range of disease severity and infections. Many patients had humoral immunity problems with a complete lack of antibody response against bacteria such as Pneumococcus. Other patients exhibited defects in other arms of the immune system that caused increased susceptibility to mycobacteria and skin infections.

In 1999, the genetic defect responsible for the large majority of these cases was discovered. The disease was named the NEMO syndrome to reflect the genetic mutation. NEMO stands for the “NF-kappa B Essential Modulator” and is also known as the Inhibitor of Kappa B Kinase gamma (IKK gamma). The protein is required for the activation of the NF-kappa B family of transcription factors, which regulate gene expression and the development of a number of organ systems, including the immune system. The complete absence of NEMO activity is not compatible with life.

In the NEMO syndrome, the NEMO protein retains partial activity. An embryo develops, but many organ systems fail to develop normally, including the immune system. In the NEMO syndrome, B-cells, T-cells, neutrophils, macrophages and dendritic cells all respond poorly to bacterial and fungal invasion. This leads to problems in the function of the innate immune system and problems with the formation of protective antibodies against microbes, as well.

There is at least one additional genetic cause of a NEMO-like syndrome with defects in a similar pathway. While this form can affect both males and females, it is extremely rare.

ED is difficult to recognize early in life. Many infants often have eczematous rashes and thin, sparse hair, so infants with true ED may go undetected. The eruption of conical teeth, however, is an important sign that should be examined closely.

In developing countries, particularly those that use the Bacillus Calmette-GuÉrin (BCG) live vaccine against tuberculosis, patients with NEMO may develop disseminated infection with the vaccine strain of the BCG mycobacteria. This organism often invades several organ systems.

While meningitis or other deep tissue infections raises the immediate concern for a primary immunodeficiency, the presentation of the NEMO syndrome can be much more subtle with patients having a history of recurrent skin infections or an infectious history similar to the presentation of Common Variable Immune Deficiency. Fungal infections have also been noted in patients with NEMO.

Once NEMO is suspected, a patient must have a thorough immunologic screen to evaluate the NEMO syndrome although genetic testing is the only means to conclusively make the diagnosis. Patients with NEMO can have varied results of immunologic tests.

Patients with NEMO syndrome may have an elevated IgM or IgA, but not both. The IgM is not usually as high as is seen in classic hyper IgM syndrome. Patients also tend to have low IgG and IgE. However, it is important to note that patients may also have normal levels of all immunoglobulins early in life. Patients may also have normal to high total white blood cell counts. Lymphocyte subsets are often normal and common clinical tests of T-cell function are normal or only subtly diminished.

One key (and nearly universal) feature of the NEMO syndrome is absence the development of anti-pneumococcal responses following pneumococcal vaccination with either the conjugated (Prevnar) or polysaccharide pneumonia vaccine (Pneumovax). This lack of response is notable even in patients with normal total serum immunoglobulin levels.

Innate immune cells from patients with the NEMO syndrome also demonstrate poor responses after stimulation with molecules derived from microbes. Though such findings do not make a definite diagnosis of NEMO syndrome, these tests offer valuable insights into host defense defects.

Therapy for the NEMO syndrome is aimed at preventing infections and complications stemming from infection. Patients receive immunoglobulin replacement for the antibody immunodeficiency. While this is a cornerstone of therapy, it is insufficient to control infections given the broad-based immune defects in these patients. Therefore, patients also receive a series of prophylactic antibiotics as part of their preventive regimen. These antibiotics are aimed at protecting the patients against Pneumococcus, Staph, and mycobacterial infections.

Patients with NEMO syndrome have a number of issues that make prediction of their clinical course difficult. First, the relatively recent recognition of the disease and its rarity mean that little data exist to give clear guidance with regard to long-term outcomes. Second, there is wide variability in the severity of the immune deficiency. While some patients can expect relatively normal life expectancy, many patients have severe forms of the disease with both infectious and non-infectious complications. These non-infectious complications have been particularly difficult to understand as these often mimic infections during presentation. 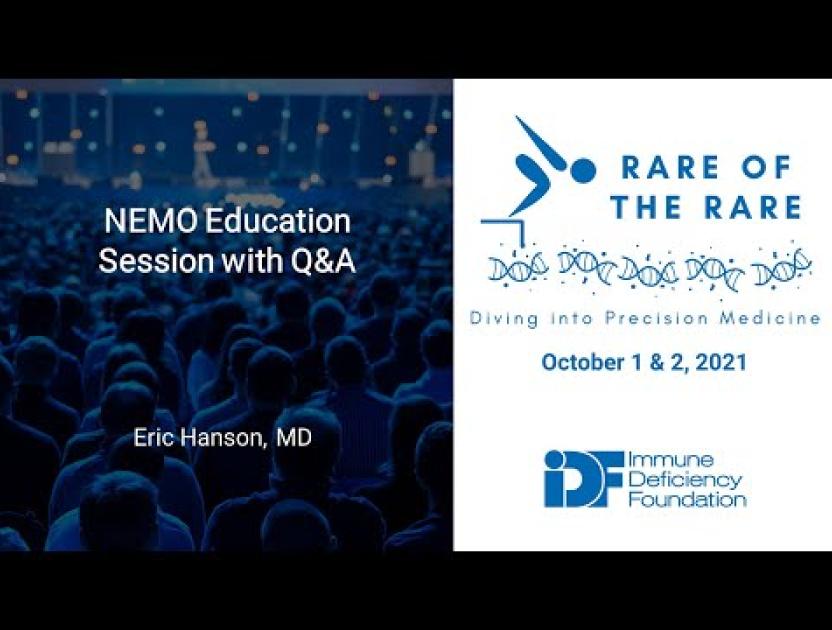 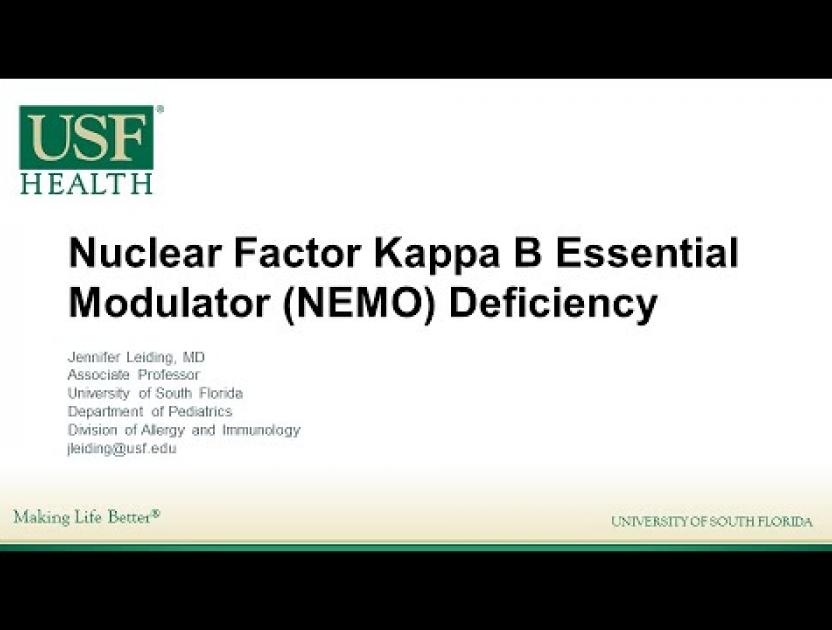 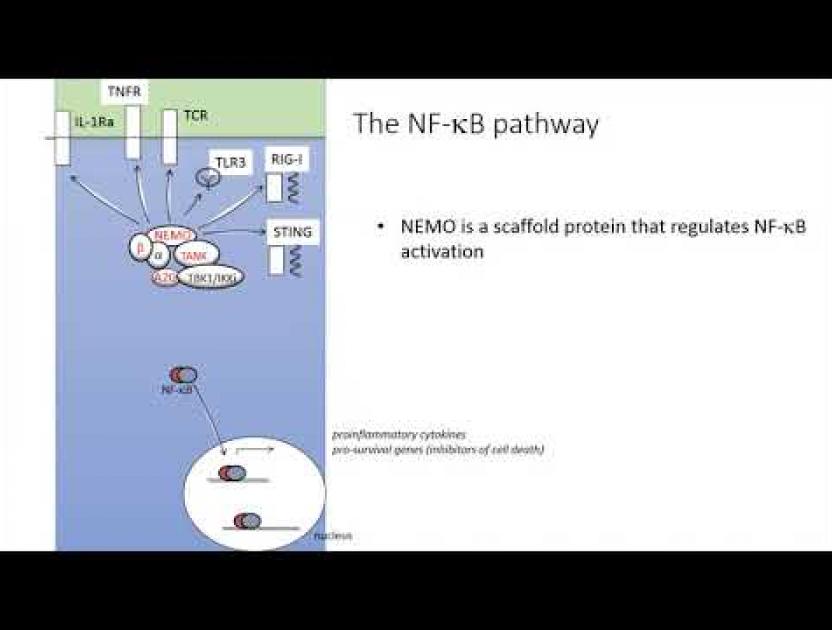 NEMO Deficiency and Other Disorders of NF-kB Regulation
IDF Channel 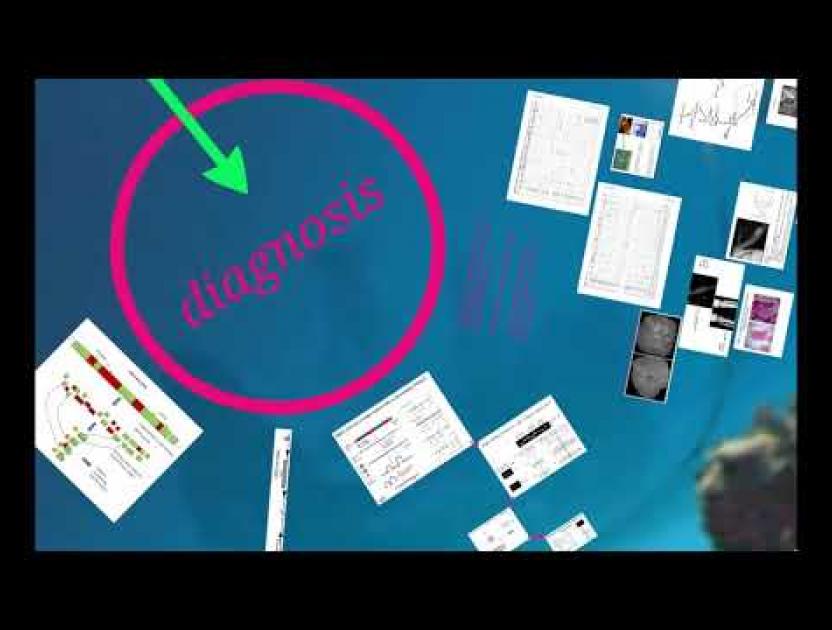 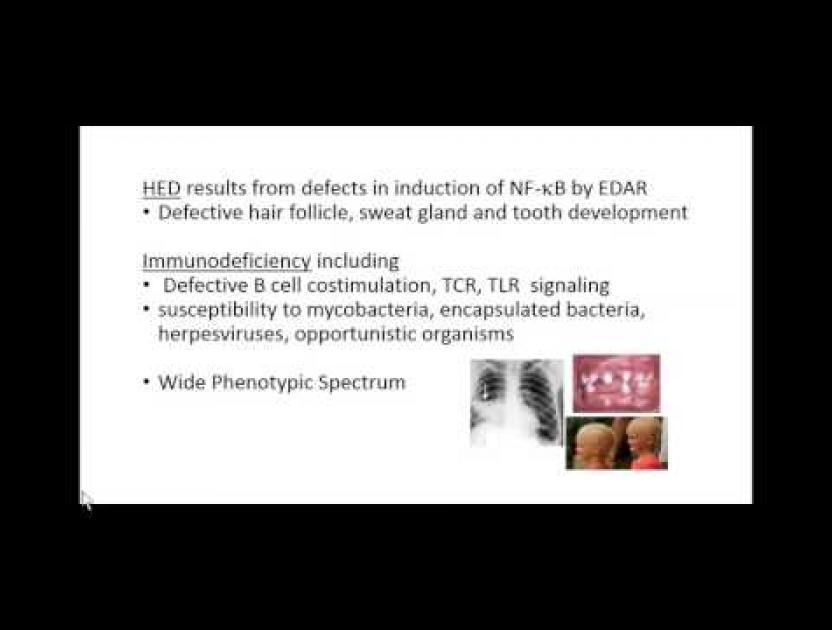