As with any medical field, there are a number of terms in the immunodeficiency community that can quickly get confusing for new patients and their caregivers. A few examples: immunocompromised, immunosuppressed, primary immunodeficiency, secondary (or acquired) immunodeficiency, inborn errors of immunity.

What do these terms mean? And how do they relate to each other?

Someone is immunocompromised if they have a weakened immune system, according to the National Cancer Institute. Although the term “immunocompromised” seems straightforward, when the Centers for Disease Control and Prevention (CDC) used it to describe who should receive a COVID-19 ‘booster’ vaccine, there was considerable confusion among both medical providers and the public (the CDC has since clarified its booster guidance).

Part of the confusion comes from the many different conditions and situations that can cause someone to be immunocompromised. A person who is immunocompromised can also have a wide range of symptoms, from mild to life-threatening. However, the term alone doesn’t specify cause or severity.

To complicate matters, “immunosuppressed” is often used interchangeably with immunocompromised.

In 2013, the CDC estimated that 2.7% of the U.S. population was immunocompromised based on self-reporting through the National Health Interview Survey. Updated to 2022 population estimates, that’s almost 10 million Americans whose immune systems aren’t functioning properly.

Primary Versus Secondary (or Acquired) Immunodeficiency

Inherited conditions (those that run in families) that cause a person to be immunocompromised are known as primary immunodeficiencies (PIs). They result from mutations in specific genes passed down from parents to their children. There are more than 450 rare, inherited conditions recognized as primary immunodeficiencies by the International Union of Immunological Societies. This number continues to grow. 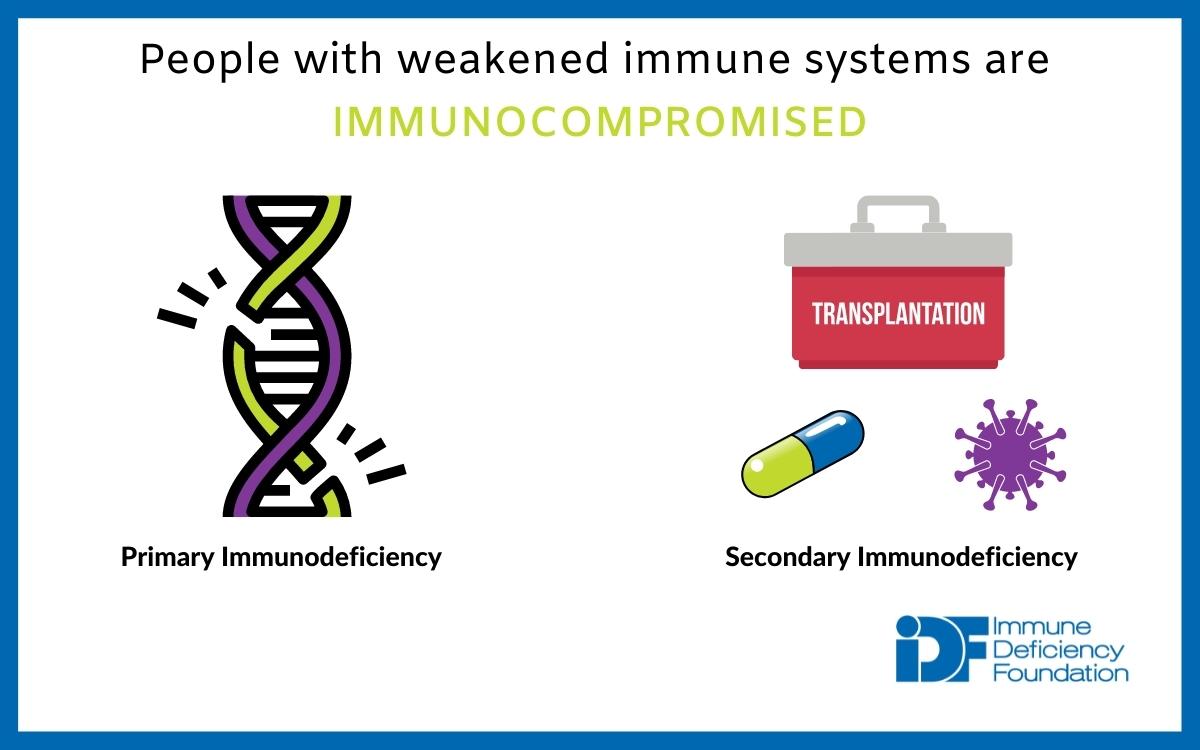 Our understanding of immune system conditions has grown a lot since the first PI – X-linked agammaglobulinemia – was identified in 1952. To reflect this better understanding, the medical community has adopted the phrase ‘inborn error of immunity’ (IEI) in place of primary immunodeficiency.

‘Inborn error of immunity’ captures some key information that ‘primary immunodeficiency’ does not.

In medical terminology, ‘primary’ refers to the first or most significant symptom, or the body system where a condition originates. The term ‘primary immunodeficiency’ implies that the conditions mainly affect or originate in the immune system. But some mutations are in genes so important (or affect such a large number of genes) that symptoms originate in and span many organ systems. However, all mutations that result in inherited immune system conditions are, by definition, present from birth, or ‘inborn.’

Also, inherited immune system conditions can cause autoimmune symptoms (where the immune system attacks normal organs and tissues) in addition to weak immune response to infection. ‘Errors of immunity’ describes these types of symptoms better than immunodeficiency.

In 2017, the International Union of Immunological Societies (IUIS) committee that classifies inherited immune system conditions renamed itself to reflect the ‘inborn error of immunity’ terminology. IDF will continue to use primary immunodeficiency as the more familiar term but will incorporate inborn error of immunity as a synonym encompassing all of the diagnoses in our vibrant community.