While fever is considered a sign of infection, many individuals PI anecdotally report a lower than normal average body temperature.
Home / Body Temperature in Patients with Primary Immunodeficiency

In 2018, the Immune Deficiency Foundation (IDF) conducted a non-clinical study of "Body Temperature in Patients with Primary Immunodeficiency," also referred to as "The Fever Study." The idea for this study arose from individuals with primary immunodeficiency (PI) who were a part of the IDF Friends online community, and the IDF PI CONNECT Research Forum. While fever is considered a sign of infection, on these websites, many patients with PI stated they had a diminished fever response when they were sick (i.e., they had temperatures lower than 101°F when they were experiencing an infection).

Misdiagnosing patients with PI who do not present the typical fever response can increase the likelihood of patients not receiving critical antibiotics needed to fight off an infection.

In response to that concern, IDF collaborated with Dr. Art Jongco and Dr. Kathleen Sullivan, and over 250 households were recruited to participate in the Fever Study.

For this study, both an adult with PI and an adult without PI who lived in the same household had to participate. Both were asked to record their temperatures three times a day for five consecutive days (between March 26, 2018 and March 30, 2018). They were sent a thermometer and observation booklet to fill out. At the end of five days, the participating households mailed their booklets back to IDF and were later compensated for their participation. Data from the study was analyzed by Dr. Shouling Zhang.

Click the image below to see the poster created from the study results. 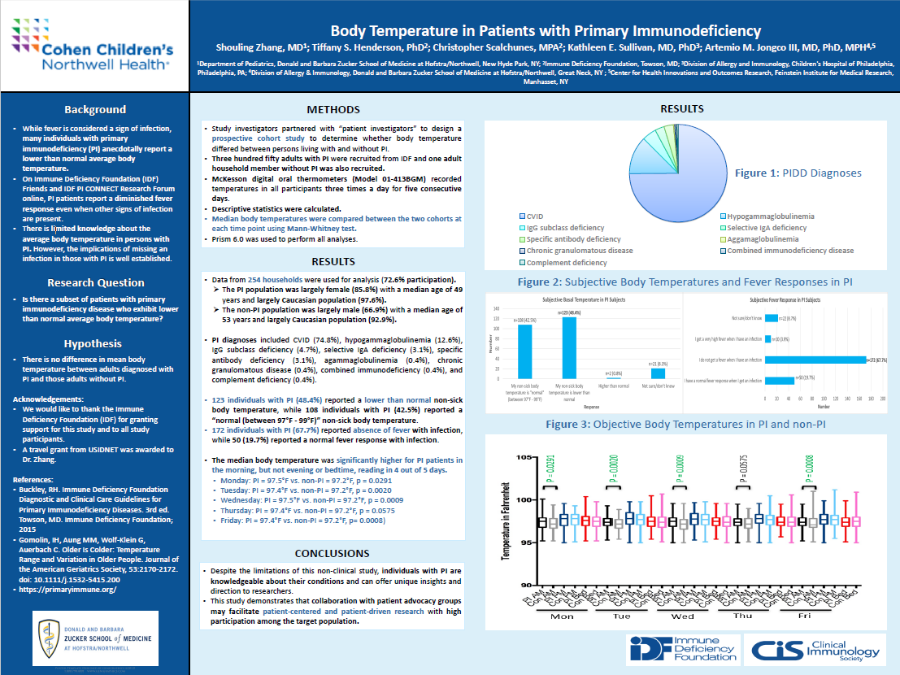 Please contact us at research@primaryimmune.org for more information on the fever study, or with additional questions about body temperature in patients with PI.